Background
In 1987 I bought a new amp, a Gallien Krueger 200MB. I used this amp for a lot of different gigs sometimes with a extension cab but for most part as a standalone amp. The MB250 was a small combo amp that was a real breakthrough product back in 1987. Small but powerful and well built. I still have this amp! I have changed the speaker once since the surround of the original speaker dried and fell apart. However once you open the enclosure once it’s really hard to get it air-tight again. The construction is built upon a closed box to get the sound. I have used this amp mainly as a backup only for the last 8+ years. When I planned a trip to Brazil in 2015 the need for a new really small and travel friendly amp grew. I started to look around, getting different recommendations from friends and online searches, found the Phil Jones Double Four and decided to try it out.

Description
The Double Four is a 70 watt (all digital, pre- and power amp) with two four inch speakers (hence the name). It features a specially developed innovation called RALFR®, a special reflex port that greatly enhances the bass response. Besides basic amp controls there is an AUX-input (for your smartphone or more…) with a level control, headphone and Line out. You can use it in either a vertical or horizontal mode. Read more about the amp here.

Although the amp is all digital it sounds very warm and organic and brings out the core tone of everything I put through it, and it weighs in at only 4 kg! It is loud enough for rehearsals and smaller venues. More info below!

Gig-stories
This little amp has been working hard for me. As I mentioned in the background the initial goal of the amp was to bring it with me to Brazil in 2015 when I visited the capital city Brasília to check out different music schools. I met a lot of wonderful and lovely people on the trip.

The amp was really a great companion to me and my Kala acoustic/electric ubass. I used the ubass with the amp on outdoor restaurant gigs, at a small pub and at the different schools me and my colleague visited, played concerts and held workshops at.

Back in Sweden I have used the small and powerful combo for a lot of rehearsals and small gigs. It has been a great way to always have a great sound wherever I go. The people I have played with have always been overwhelmed and surprised about the small amp with a big sound. It has worked well with ubasses, electric basses and upright bass. Although it’s small and “only” 70 watts i has even worked as the only amplification in acoustically big sounding rooms like stone churches together with guitar and vocals. 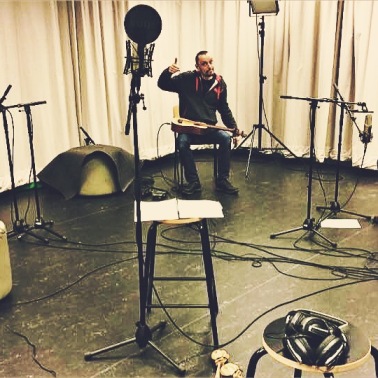 Live in studio recording with vocals, guitar and accordion. 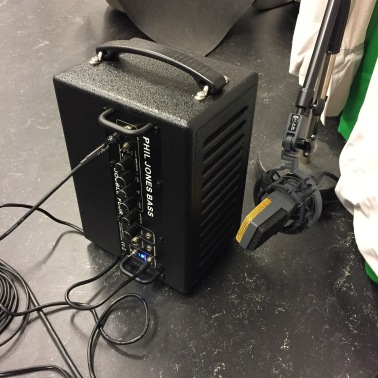 Miking the rear port and blending it wit the DI signal from the ubass.

Let’s listen to some examples of how the Double Four sounds with ubass in different genres and situations.

Tango (See info above on how this was recorded!)

Recorded through the PJB Double Four

Recorded a a rehearsal with a Zoom H6

This Summer I also made a ”iso-amp-box” for ”silent recording” with the Double Four.

I made this box for recording dates where I need to get a miked amp sound in the same room with other musicians. Very little sound is heard outside the box and not much sound will get into the box. It can be used for the actual recording or to get a great and organic headphone sound when tracking.

I will do a dedicated blog post about how that works (and sounds) later!

If you’re looking for a small and ultra portable amp with a warm and natural sound you should definitely add the Phil Jones Double Four to you check-out-list. Playing my Kala Ubass with the PJB DoubleFour is a match made in heaven – a wonderful and small footprint with a big warm sound – a great combination for sure!